Coming up on the four year anniversary of release, with over 12,975 downloads to date, Tales from the SFR Brigade is still available and still FREE.

If you haven't grabbed a copy yet, you can find it at the vendors listed on the right sidebar. The collection features nine terrific Science Fiction Romance short stories in a variety of styles and settings.

Be sure to check out the author pages (see tabs above) and other special pages to read more about this project.

The Brigade Brings Forth a New Anthology!

You've heard about Portals project--the SFR Brigade's multiple volumes of Sci-Fi Romance first chapters. Volumes One through Three are already released, or in the process of releasing with more coming soon.

Meanwhile, we have even more news! The SFR Brigade is launching another anthology!

It's been three years since Tales from the SFR Brigade debuted, and the Brigade is back with eight more short stories by a number of well-known and up-and-coming SFR authors.

May we introduce Romancing the Stars. 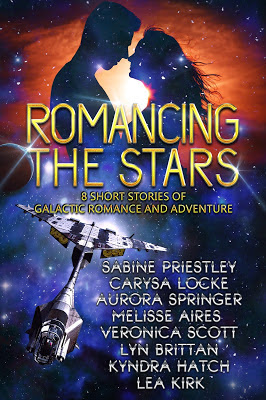 Want to know more? Here's a brief introduction to the authors and the stories.

Heat Level: Mild
A shore leave excursion goes terribly wrong. Will Clint be able to save Mira from the aliens holding her prisoner?
-Maricar's Gamble by Lyn Brittan
Heat Level: Mild
Follow Mari Ocampo, a killer on the run willing to do anything to survive, even if it means the unthinkable: going on the straight and narrow.
-Hunter Bond by Carysa Locke
Heat Level: Mild
Sanah and Dem will do anything to help their ailing child, even if it tears their marriage apart.
-Gifts of Jangalore by Aurora Springer
Heat Level: Mild
Empath Rosa Spruce is the hired guard for Psi Master Varan. Their perilous venture brings unexpected rewards.
-Cyborg Security by Melisse Aires
Heat Level: Medium
Adoption has never been this difficult, and the consequences are on Aerria. Who can she trust?
-All of Me by Lea Kirk
Heat Level: Medium
Can a pregnant widowed woman let go of the past and embrace her future?
-Aliens in the Barn by Kyndra Hatch
Heat Level: Hot
There’s a mechanical extraterrestrial living in Alex’s barn, but what will happen if the alien’s wife arrives? Wait, Bazin’s married?
-Alien Bond by Sabine Priestley
Warning: Hot and steamy content intended for 18+
Kara isn’t happy with the seemingly alien control of the Sandarians, but can she resist if one bonds to her?
Posted by L. A. Green at 2:53 PM No comments:

A few years ago, the SFR Brigade published Tales from the SFR Brigade to offer a number of Science Fiction Romance short stories that you could own for free as an introduction to the authors and/or the genre.

The anthology is still available and still free (see links on sidebar), but now the SFR Brigade is back with a whole new project and a slightly different concept.


The SFR Brigade community of writers is creating a FREE four volume set of Science Fiction Romance beginnings ~ and only beginnings ~ of 40 books by 40 different authors!

This isn't an anthology, it's a transport to whisk you away to a host of exciting SFR worlds. We know you're going to enjoy the trip, and you're sure to find many amazing adventures you'll want to get lost in.

These four volumes will offer readers who are already fans of the genre a quick and easy way to scout Science Fiction Romance stories that capture their imagination and incite their sense of wonder.

They'll also serve as a gateway for those who've not yet read SFR by providing an unique sampler of what the genre has to offer--the exploration of exciting new worlds, times, and civilizations, and the characters who live them.

Portals volumes will begin releasing on May 17, 2016--with a new volume coming out approximately every two weeks.

UPDATE: Portals Volume One  and Volume Two have now released! They're available at no cost via many booksellers. See link below to Portals site for further details.

Tales from the SFR Brigade, a free anthology of Science Fiction Romance short stories, has now reached a milestone of 11,000 downloads and enjoys a 4.5 star average rating on Amazon.

It was also previously selected as a Top Pick by Night Owl Reviews.

If you haven't grabbed a copy yet, the anthology is still available from a wide variety of vendors. See the sidebar for direct links to the bookseller of your choice!

Our Latest Amazon Review -- Another 5 Stars

Sci-Fi Romance lovers' must have book

"If you love, or even like, Sci-fi Romance, this is a must read. So many wonderful stories! I have reread this book twice, and my favorites at least three times."

A big thank you to all our fans for taking time to write these wonderful reviews! This anthology continues to rank in the top 100 Kindle Romance > Science Fiction titles on Amazon!

Tales from the SFR Brigade is always free on Amazon and most other major sales sites. See the right side bar for links.


"If you love science fiction and romance, you're going to LOVE this collection. It's like a non-stop episode of my favorite show...there were at least two or three stories that I absolutely LOVED, like the I-want-to-hug-it and put-in-my-pocket and carry-it-around-forever kind of love. So worth the read!"

Read All Amazon Reviews
Posted by L. A. Green at 1:47 PM No comments:

The Tales from the SFR Brigade anthology is quickly approaching the 7,000 in sales mark--or make that 7,000 in non-sales! Why non-sales? Because it's still absolutely FREE!

Check out the dynamic Science Fiction Romance anthology at any of the links on the right or if you're still not sure, read the almost 100 ratings averaging more than 4 stars on Goodreads, here.
Posted by L. A. Green at 1:28 PM No comments:

Welcome to the Tales from the SFR Brigade Anthology site.

This free anthology was published in June 2013 by the SFR Brigade, an online community of Science Fiction Romance writers and authors. Click on the page links (at top) or story links (on the sidebar) to learn more about the anthology, the authors, the editors, and the SFR Brigade.

News about the Anthology